Updates of casualty data for November 2007 have now been published for the casualty monitor projects for Iraq, and British forces in Iraq and Afghanistan.


The extent of the death toll resulting from the US-led invasion of Iraq and the following occupation and insurgency, continues to be the subject of debate. Ever since 2003, scientific discussion, heated debate in the media, and political spin and manipulation, have all been prominent as various stakeholders have strived to define a figure for the human cost to the Iraqi people.

As claims mount about the success of the military surge in it appears that there is real evidence that the Iraqi casualty rate may be falling. Welcome news indeed. To try and gauge what the extent to which this is true we are pulling together various estimates and data sources on casualties, both civilian and combatant.

When undertaking this review it quickly becomes apparent that there is still no one definitive or completely reliable source. We have previously reviewed the limitations of the available data sources on casualties. To illustrate the range of estimates that exist we have constructed a graph of some of the publicly available estimates, drawing on the following sources:

In the first graph we show monthly mortality estimates from 3 passive surveillance systems. Complete coverage of the war time period is only available from Iraq Body Count. However, it is worth noting that the estimates achieved by this project seem to be systematically lower than those from the Brooking Institute, which made adjustments to the IBC estimates using Iraqi Ministry of health data. The data from the Coalition Casualty Count is clearly presented on their site as being an incomplete underestimate of Iraqi deaths. Indeed, all three passive surveillance systems are almost certain to be seriously underestimating Iraqi mortality. This is not unexpected and is not a criticism of their methods per se. It just need to be clearly acknowledged, as it is by the Coalition Casualty Count project. 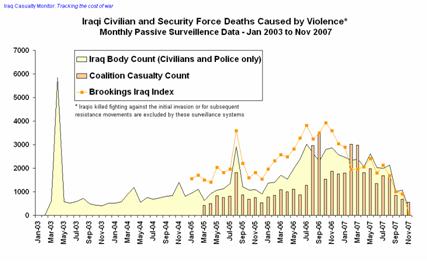 It is very important when looking at different estimates to bear in mind that they are not all trying to to measure the same thing. Iraq Body Count for example, which monitors media reports and some other sources to derive its estimate, is concerned with only civilian and police deaths and so will exclude deaths of members of the armed forces, militia, resistance, or terrorists. Other studies, such as the Lancet mortality surveys, have attempted to estimate the entire death toll including all categories of people. Therefore, even if their figures were representative of the entire population there is no reason to suppose that the estimates of deaths would be the same.

When trying to unravel the various sources of information on war deaths it is useful to distinguish between different types and causes of mortality. Death is as certain as taxation so in all populations there will be a 'normal' rate of mortality caused by causes such as chronic disease, old age, and traffic accidents. However, when an event such as a war occurs there will be additional deaths. These deaths are referred to as 'excess' mortality.

In Iraq, this excess mortality consists of deaths caused directly by war-related violence and deaths caused indirectly by the breakdown in infrastructure, law and order, and public health during and following the invasion.

The second graph presents 4 estimates of total Iraqi fatalities. Bear in mind that these are estimates of different things. However, it is well known by epidemiologists that passive surveillance systems will tend to underestimate mortality compared to active approaches such as population surveys.... 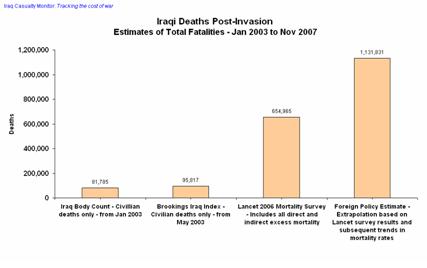 The official handover of Basra province by the British occupation forces to the Iraqi authorities was marked by celebrations in Basra today. But what was achieved and how does it affect ordinary Iraqis? Why did it happen, and was this a real 'handover' anyway? Here are some comments from the mainstream media.

"Meanwhile inside the city which British troops have not entered since their withdrawal from Saddam Hussein's former palace three-and-a-half months ago, Iraqis paraded and celebrated what they called an "historic day".

The handover of control of security in the province is the biggest landmark yet on the path to full British withdrawal from Iraq. It comes at a time when extra forces may be needed in Afghanistan." [ITN]

“We knew we would succeed [in toppling Saddam], there was never any doubt, and we all knew that we would then enter a honeymoon period of peace-support operations which would be vital in winning hearts and minds. But when the initial fighting was over we were left with a force smaller than that which was based in Northern Ireland.” [The Times]

"The British have never sought to maintain the same level of control as the Americans did over the provinces the U.S. oversaw after the 2003 invasion. Since elections in 2005, southern Iraq has been under the domain of religious Shiite parties and their militia allies.

All of which means the British are handing over something local power players already possess.

"I don't think there is a handover. You've never had real British control of Basra or the area," said Anthony Cordesman, of the Center for Strategic and International Studies. "What you are really watching is a sort of nominal transfer of authority to the central government and Iraqi forces." [Associated Press]
Last week a British infantry officer wrote on the internet forum Arrse: “To anyone who thinks we have made it a better place, we haven’t.” [The Times]

Finally, this is by no means a British withdrawal. At the end of May 2007 there were 5,500 British troops in Iraq. By Christmas 2007, The MOD expects there to be around 4,500 and that this number will fall to around 2,500 from next Spring. No date has been set for withdrawal.

The British misadventure in Iraq is far from over.

LFCM: Casualty Monitor has now moved to its new home at http://www.casualty-monitor.org/

All previous links should continue to work but please us know if you encounter any problems. Thanks.