***If you live in London, why not join us this Saturday for another weekend of sunshine and strawbaiting? [email protected]***

The Belgian-Mexican-British delegation of the London Friends of Craig Murray (all four of us) arrived in Blackburn just after 11am. Craig immediately dispatched us to the town centre where the Foreign Secretary's carefully choreographed walkabout was turning into something of a washout.

A giant Green Goddess fire engine had been driving round in slow circles, filling the town centre with the thumping bass of Craig Murray's campaign tune. Straw's New Labour war pixies squeaked angrily into their cellphones, desperately trying to locate the source of the noise, but the shopping centre's ingenious concrete acoustics were making it impossible to get a "lock". Eventually the "Sack Jack" mobile was tracked down by an elite cohort of Shopping Centre Security Contractors. By the time we arrived, an uneasy calm had descended.

The media who'd gathered to watch Jack seemed delighted to see Craig, and as the cameras rolled he set about explaining why he'd decided to stand against our torture-tainted Foreign Secretary.

Then in the distance we heard the distorted bass of a Green Goddess on the move. The crew of the "Sack Jack" mobile had escaped the Shopping Centre heavies, passively resisting an attempt to destroy their sound system.

Horns hooted in support as the Green Goddess swept by for one final pass, emblazoned with Craig Murray's campaign posters. The show was back on the road.

In the afternoon, the "Sack Jack" roadshow moved to the northeastern part of the city. We spent several hours delivering leaflets door to door, and answering people's questions about the campaign. We didn't see a single Labour poster, though we did bump into the Tory candidate, Imtiaz Ameen. He told us it was going to be "a straight fight between Labour and the Conservatives" - yeah, right. He was the first person we'd met who even mentioned the Tories.

We spent the next morning leafleting and preparing to gatecrash Jack Straw's private love-in with local Muslim bigwigs at the Jann Community Centre. Jack had snuck in by the time we got there, but there were plenty of delegates still arriving, a growing crowd of protestors and a good number of journalists. The atmosphere seemed friendly enough, to begin with. "Yes, you have every right to be here. It's democracy", the Labour man on the gate said to a Lib Dem heckler. He continued in Urdu.

The heckler protested in English. "Why are you insulting me? You're saying one thing in English for the cameras, and then you're insulting me in Urdu. Do you think people don't know what you're doing?"

Some kids walked up to the gate from inside the centre, curious at the commotion. I told them why we were protesting and handed them a couple of leaflets. At this point the guy on the gate lost it. "No! Get away from there! Give those back!" he shouted at the kids. So much for democracy.

I got my first Urdu lesson shortly afterwards. A local Muslim leader had turned up with a megaphone and started handing out plastic spoons. "Excuse me sir, they have run out of spoons in there. Would you like to take one?", he said, as the delegates passed by. The Urdu-speakers in the crowd began to laugh. "Jack Straw kay chumchay!" shouted several of them. Many of the delegates laughed too. "It means Jack Straw is a lackey", explained the guy with the megaphone. "In Urdu, if you are a spoon, you are a lackey - you are someone's poodle".

The Urdu-speakers on the gate were replaced by two of the Straw war-pixies, who looked decidedly "Old Labour" - and more than a little uncomfortable. I asked one of them if he'd supported the war. He told me he thought that the question was "boring". Craig, he insisted, had been guilty of sexually harrassing his staff when he was working for the Foreign Office.

The sexual misconduct smear is a classic piece of New Labour doublethink, with startling similarities to the argument over WMD. In August 2003, after Craig had had the audacity to criticise British and US support for the tyrannical regime in Uzbekistan, he was presented with 18 disciplinary charges and told to resign. These charges ranged from the bizarre (driving a car down the embassy steps) to the abhorrant - offering British visas to Uzbek girls in exchange for sex. But the common element, and the key problem for whoever came up with the charges, was that none of them were true. The part of the story that New Labour isn't so keen on remembering goes like this: When Craig refused to resign, the Foreign Office spent months searching high and low for evidence to support the charges. In the end they had to admit that all 18 were bogus: http://www.guardian.co.uk/uk_news/story/0,,1130080,00.html.

When I reminded the Straw man on the gate that Craig had actually been cleared, his response was a flat denial.

"So the Guardian were lying then?". He nodded.

As the hours passed, speculation grew that Jack Straw might have to leave the Community Centre by hopping over a fence. Dozens of delegates had already come out, and it was time for the London Friends to head home. Jack Straw was still inside, no doubt making the most of the free food.

On the train back to London we got chatting to a friendly young lad from Stoke. He was in the army, he said. He was still in training, but was looking forward to going out to Iraq or Afghanistan soon. He was 18 years old.

***If you live in or near Blackburn, why not drop by Craig's campaign HQ at 15 Railway Road, very near the station? For more information on how you can help, check out http://www.craigmurray.org.uk/contact.html*** 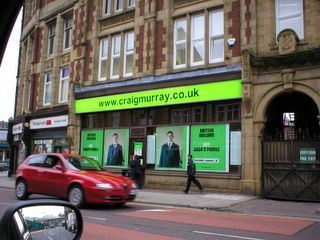 Campaign HQ, Blackburn
This weekend London Friends are in Blackburn, helping out in the campaign. More of us will be travelling up for the final weekend of campaigning next week. Don’t miss out on the chance to be involved! Contact the London Friends on 07969 802 830 or email: [email protected]

Breadsticks at dawn - poodle meets underdog at the Blackburn Bistro

Get involved! On the weekend of the 23rd April we will be travelling to Blackburn to help with campaigning. If you would like to join us for the great north run contact the London Friends on 07969 802 830 or email: [email protected]

According to Marina Hyde, a food fight was narrowly avoided last week after Jack ran into Craig at a Blackburn eaterie:

"To Blackburn, glorious Blackburn, scene of the greatest test of Jack Straw's diplomatic skills since he carried Colin Powell's satchel during the failed attempt to secure a second UN resolution on Iraq. Striding into a restaurant in his constituency last Saturday night, the foreign secretary discovered that the one available table was next to that occupied by Craig Murray, the former British ambassador to Uzbekistan who is challenging him as an independent. What to do? Storm out? Bomb him? Adorably, Jack took the third way: deciding against a starter and enjoying his meal in a pose of utterly rigid relaxation. Attaboy!"
http://www.guardian.co.uk/diary/story/0,,1460248,00.html

For further details of Craig Murray's campaign, check out http://www.craigmurray.org.uk

Get involved! On the weekend of the 23rd April we will be travelling to Blackburn to help with campaigning. If you would like to join us for the great north run contact the London Friends on 07969 802 830 or email: [email protected]

So, less than 3 weeks to go and the TV election saturation limit is approaching fast. Endless tax and spend plans spun, twisted, distorted and revised...... its enough to ensure total disengagement. But wait just a little before dropping out, this election is actually hugely important - war, lies, torture, kidnapping and espionage - enough to make you want to write a good novel - and its a chance, our only chance, to have a say on what we want to be involved with and have on our consciences for the next 5 years.

Whatever your usual political persuasion, this election is an opportunity to vote for voices that demand a legal, smarter, strategically effective and honest alternative to what we have had thrown at us for the last 5 years. Craig Murray is one such voice that deserves to be heard and supported. This is what the London Friends of Criag Murray are about.