The BBC is reporting that more arrests and detentions have occured over the weekend as the Uzbek government tries to prevent further protest. For the latest devlopments see the live news in the right hand pannel.

We are pleased to report the installation of a live news feed bringing up-to-the-minute reports on the rapidly evolving Uzbekistan situation. The feed will also include reports on the activites of Craig Murray and related issues.

Click on your browser refresh button to make sure you have the latest headline!

Managing public anger over Uzbekistan - Its as easy as 1-2-3!

Three phases and its over - here's how.

Phase 1 - express outrage and condemnation, back call for never-going-to-happen enquiry, leave to settle for 2 weeks

Phase 2 - from day 14+ start quitely briefing about how difficult it is for the government in Uzbekistan to progress when faced with an extremist threat. Subtley create the unavoidable conclusion that the UK/US was in fact doing the right all along by supporting the Karimov regieme. Its a hard decision but we have no choice dear boy.. Draw on statements from visiting ministers of new democracies to back up this obviously common sense position. Play the T card and classify an anti-goverment group in Uzbekistan as Terrorists... Boy we should be selling them bigger guns - they certainly need them!

In case of Andijan 2 revert to phase 1 and repeat cycle.

Please note that for those living in UK sending a fax to your MP is still permitted during Phase 2.

Following the horific events in Andijan the Metro asked Craig "What next?" The depresing reply was:

"Not much. We'll see more hypocrisy from the US and the UK, calling for everything short of actual change. Democratic elections within a year are the only thing that will defuse the situation."

So how did he think the UK government would react to that key demand?

"There is no sign we're going to call for that, nor that we're going to stop calling Uzbekistan 'our ally in the war on terror', nor that the US is going to stop giving the regime a few hundred million dollars a year. There's no sign Jack Straw will stop using intelligence from the Uzbek security services which is extracted by torture."

To urge the UK goverment to support the call for democratic elections within one year in Uzbekistan we urge you to write to your MP.

*Support the UN demand for an independent enquiry into the events in Andijan.
*Call for an embargo on aid to the Uzbekistan government until it complies with the demand for an enquiry
*Demand that the UK government stops using evidence gained under torture.

A small but determined group of demonstrators braved intermittent torrential rain at the Uzbekistan Embassy in London this afternoon. The police had barricaded both ends of Holland Park, forcing the protest to take place at a distance from the embassy building. Nonetheless, the message was sent that the world is watching and the Uzbek government must permit an independent enquiry into the events in Andijan.

The UK and US governments cannot walk away from their role in the crisis and the next few weeks will be a telling time for Jack Straw and colleagues at the FCO.

Back the UN call for an independent enquiry!

The United Nations High Commissioner for Human Rights Louise Arbour is deeply concerned over the recent violence and loss of life Uzbekistan and is calling for an independent enquiry. However, it seems likely the Uzbek Government is determined to resist the demand. Jack Straw is making some of the right noises but Criag Murray remains deeply sceptical about the UKs role. Listen here to his latest radio interview where he talks about the British response to the crisis.

Join us at the demonstration on Saturday! See below for details.

*Support the demand for a UN enquiry into the killings.

*Demand justice for the hundreds murdered in Andizhan this week.

*Call for an end to Western support for this brutal regime.

This demonstration has been called by a group of UK-based Uzbek dissidents, and is supported by Craig Murray, Britain's former Ambassador to Uzbekistan.

Please disseminate this message as widely as possible

Will tragedy in Uzbekistan lead to UK policy reform?

In an article in the Guardian 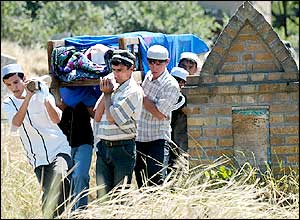 Jack Straw has now spoken on the situation in Uzbekistan calling it very serious and denouncing "a clear abuse of human rights, a lack of democracy and a lack of openness". Fine words from the Foreign Secretary, but not a mention of MI6 or CIA involvement in Uzbek security and interrogation procedures. Likewise, no mention of the 10 million US$ 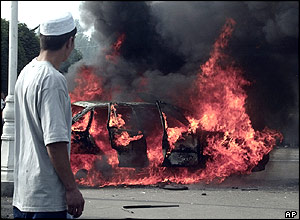 Talking of words - now could be a good to time to listen again to Craig Murray's interview on the BBC Radio 4 Today programme back in 2004. Here, he lays out his view on the involvement of the UK government and Jack Straw with previous events in Uzbekistan.
(Real Player required).

With serious unrest and violence now affecting parts of Uzbekistan, the support of the UK and US governments for the current regime comes under renewed scrutiny. Craig Murray's stand over torture, and his protests against the involvement of the British government in the process, take on particular resonance as the security crack down

Families of the Dead Pursue Blair in the Courts

Although the main focus of the Craig Murray campaign was on the British Government's involvement in torture, an underlying issue in the election was also how Blair took us to war with Iraq. Military families against the war, MFAW are now in the process of taking legal action against Blair to try and ensure full disclosure of the facts and processes that occurred. Their letter to Downing Street makes interesting, if somewhat legal, reading. It’s a cause of huge importance that has the potential to strike directly at the duplicity and deceit that lurks within our current government.

This is not just a legal exercise in retribution or justice for the families of lives lost, although this is obviously of worth in itself. It is also critically important in defining the future direction of British foreign policy, with wars against Syria and Iran still very much on the neo-con table.

If Scott Ritter is as right about the Iran issue as he was about Iraq, then we are approaching a critical period. However, with resistance/insurgency/terrorism currently running at higher levels within Iraq than before the election, the US military is under such intense pressure that attacks on Iran or Syria are probably on ice. Still, the threat remains very real and as citizens of a marvellously representative democracy, such as the one we have here in the UK, we cannot avoid responsibility for the actions of our leaders.....

Back the legal action against Blair, there should be no place for his ilk in the British political system.

So, its all over bar the shouting, and given the number of postal votes cast in Blackburn there may well be quite alot of that! Although Jack Straw polled better than expected there were reasonable showings from the other big two (both anti-war). Its important to note that the combined anti-war vote would have actually seen Jack off comfortably by several thousand!

Craig did well to land over two thousand votes - quite an acheivment for an independent newcomer to Blackburn. More importantly, the international and national press coverage given to his campaign has helped to raise awareness about the involvement of the British Government in Torture. This issue will not go away and the election campaign has laid a useful foundation for continued work to fully document and correct the current abberations within the British political/legal system.

Click here for a full results breakdown from Blackburn.

It was a hectic pre-election weekend in Blackburn with Jack Straw under growing pressure, both from the continued national coverage of his involvement in the Iraq war deception, and from increasing local disenchantment with his actions and attitudes. Saturday saw a demonstration through the streets of the city while on Sunday a packed meeting hall heard Moazzem Begg endorse Craig Murray’s campaign to put Jack Straw out of a job and bring an end to the British Government’s endorsement of torture. In addition, Craig also undertook open-air speeches from the election vehicle while the routine work of leafleting, canvassing and meeting the people of Blackburn continued.

A few snaps of some of the weekend highlights are shown below. With just two days to go and Jack struggling the work of the Craig Murray team will go on relentlessly.

Despite the apparent BBC blackout on his election campaign (the irritation of which was accentuated by the rather ironic presence of a three person BBC 2 documentary team….) the message of Craig’s campaign has clearly been getting through to many Blackburn voters.

Whatever happens on Thursday, the outrage at the issues raised by Craig’s campaign will not be dissipated. There is much work to be done before we can again be proud of the British political and legal system. Beware Jack - the truth will out!

An animated Craig Murray addresses a full hall in the centre of Blackburn on Sunday evening. People heard accounts of British complicity in horrific torture, both from Craig's experience in Uzbekistan and Moazzem Begg's personal ordeal in Afghanistan and Guantanamo Bay.

Moazzem Begg in discussion with a BBC 2 journalist after the Criag Murray campaign meeting (Sunday 1st May). 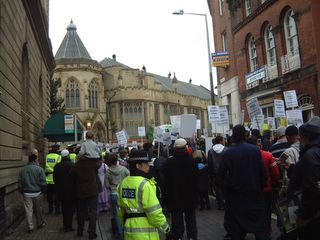 The anti Jack Straw march approaches the centre of Blackburn on Saturday. A wide variety of people and organizations turned out to protest against the actions and deceit of the current Foreign Secretary. The march ended with speeches in the centre of the city. Craig Murray spoke with a clear message to the people of Blackburn on how they had an opportunity and duty to hold Jack to account on the following Thursday.