Risk of Death for British Troops in Iraq Triples During 2007

A new graphical analysis of fatality rates suffered by British troops has now been added to the casualty monitor page for Iraq. Compiled in collaboration with MFAW, the new data illustrates the trend in the risk of death for British troops in Iraq, expressed as deaths/1000/year.

From the start of the invasion in 2003, the risk of death had remained under 10 per thousand per year until 2007, when fatality rates have climbed sharply. In January 2007 the monthly average was 3.9 deaths/1000 troops/year, but by July this had more than tripled to 13.8. This trend currently appears to be continuing, despite the pull back of British forces from the majority of Southern Iraq.

Three British Troops Killed by US Airstrike in Afghanistan

"Three British troops have been killed in Afghanistan by so-called friendly fire, the Ministry of Defence has said.

The MoD said the soldiers, from 1st Battalion The Royal Anglian Regiment, were killed at around 1830 local time (1500 BST) on Thursday.

It is understood the soldiers died when US fighter planes, called to support ground troops, dropped a bomb near their patrol in Helmand province."

It has been widely reported that was the first confirmed friendly fire incident in Afghanistan in which US fire has led to British deaths. However, in reality this is probably at least the second such event, following the death of Jonathan Wigley at the end of 2006. This small number of friendly fire incidents contrasts with a relatively large number in Iraq. The overall increase in the conflict intensity in Afghanistan combined with an increased reliance on airpower, sadly, makes this type of incident more likely in the future.

The Observer published yesterday on the incidence of injuries to British troops in Afghanistan, expressing its shock at the toll of “British Injured in Afghan War”

From information cleaned from in the field briefings they reveal that figures show almost half of frontline troops have required significant medical treatment during this summer's fighting.

“In a graphic illustration of the intensity of the conflict in Helmand province, more than 700 battlefield soldiers have needed treatment since April - nearly half of the 1,500 on the front line. The figures, obtained from senior military sources, have never been released by the government, which has faced criticism that it has covered up the true extent of injuries sustained during the conflict.”

But how much of this is new and how do these new figures compare to the official MOD data?

From our regular monitoring on this site we know that the official figure for total casualties since the start of 2007 approximates 860. This figure includes field hospital admissions, fatalities and medical evacuations and includes both frontline and non-frontline personnel. What the MOD have not released is figures for light injuries, that is those that do not require admission to a medical facility. This is what the Observer claims to has now added to the picture.

They contrast the figure of 700 injuries in frontline troops with official statistics.

“An army spokesman said official casualty figures between April and the start of August stood at 204, with about half stemming from the battlefield.”

However, it is hard to see which particular permutation of data the army spokesman used to derive his “official casualty figure”. In fact, the published data from the MOD indicates that, in Afghanistan, between the start of April and end of July there were 16 fatalities, 392 field hospital admissions (of which 101 were wounded in action), and 237 medical evacuations.

It appears that the spokesman was either quoted out of context or got his facts wrong?

Regarding the general approach adopted by the British of not officially reporting light injuries, this is in marked contrast to that of our American allies. The US military does include light injuries in its official statistics, which they classify as those returning to duty with 72 hours. Total casualty figures for US troops therefore tend to be proportionately higher and are, therefore, never fully comparable to official total casualties for British troops.

In defence of the British approach it can be argued that the operational significance of someone being lightly injured, and being patched up ready for work the following day, is very different to losing personnel for weeks, months, or permanently, due to serious injuries.

Likewise, the human cost is radically different. In conclusion, its a hat tip to the Observer for raising the profile of the under reported human cost of the Afghanistan war, but several serious questions remain about the accuracy and completeness of the figures they quote in their article.

The fortnightly update of Ministry of Defence data on British casualties from the wars in Iraq and Afghanistan has now been completed for the period up to the end of July.

In Iraq the situation continues to deteriorate. The 3-month moving average for combat casualties has increased again, rising to 44 per month, while total casualties for 2007 so far have reached 1246.

Regarding Afghanistan, the situation is more mixed. While the 3-month combat casualty average has increased again to reach 42 per month, both the June and July totals have fallen relative to the large peak seen in May. The August update should reveal whether this corresponds to a sustained reduction in combat intensity or not.

It should also be noted that while there has been some decrease in the casualties classified by the MOD as due to combat, there has also been an increase in those classified as non-combat. In July, monthly medical evacuations increased from 53 to 80 and admissions to field hospitals for non-battle or disease reasons increased from 44 to 77. Total casualties for 2007 so far now stand at 862.

Iraqi Casualty Monitor: One million deaths since the US invasion?

Just Foreign Policy have published an estimate showing that over one million Iraqis have died as a result of the US invasion Iraq. But just how reliable is that figure?

The extent of the death toll resulting from the US-led invasion of Iraq and the following occupation and insurgency, has been the subject of ongoing debate. Ever since 2003, scientific discussion, heated debate in the media, and political spin and manipulation, have all been prominent as various stakeholders have strived to define a figure for the human cost to the Iraqi people.
Today, a regularly updated estimate for Iraqi deaths crossed the staggering threshold of one million. But how can this be known, and to what extent should this estimate be taken seriously given that it is so much higher than other, more widely publicised figures? 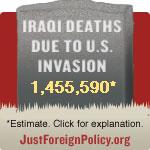 The first important point in looking at different estimates is to bear in mind that they are not all trying to to measure the same thing. Iraq Body Count for example, which monitors media reports to derive its estimate, is concerned with only civilian deaths and so will exclude deaths of members of the armed forces, militia, resistance, or terrorists. Other bodies have attempted to estimate the entire death toll including all categories of people. Therefore, even if their figures were representative of the entire population there is no reason to suppose that the estimates would be the same.

One would hope of course that reliable figures would be available from the official bodies of the responsible governments and military. Indeed, it is these bodies that have a responsibility to monitor casualties to ensure their compliance with international law.
Other sources of potential sources of information include:
So, the bottom line is that it is damn difficult to reach any kind of a consensus figure for the death toll using any of the above sources. Deriving an estimate for total casualties (fatalities and injuries) would be even more challenging.1

However, these types of difficulties are not at all unique to Iraq. Similar constraints apply in many conflicts around the world and this situation has led epidemiologists and relief agencies to develop standardised methods that can be used in surveys to generate a reliable estimate of fatalities. These cluster survey techniques have been applied in two national surveys in Iraq, and the results were published in the Lancet medical journal in 2004 and October 2006.

The results from the two surveys are remarkably consistent, a fact that lends reassurance to the validity of the measurements. The trend in the mortality increase that they found in their 2006 paper is also consistent with increases in other estimates of mortality from Iraq Body Count and the US Department of Defence. This comparison is shown in the figure below, reproduced from the 2006 Lancet paper by Burnham et al.

More recently, Just Foreign Policy have utilised these different data sets by combining the data for the 2006 Lancet survey with the trend in casualties observed by Iraq Body Count. This melding of data and approaches has led to the creation of a regularly updated estimate of current Iraqi deaths shown above.

The formula used to derive the estimate is:

Is this a valid estimate? Well the answer you would get would, of course, be very dependent on who answered the question. In the opinion of this blog this estimate is currently the best available for total deaths during the current Iraq war.

The real figure for Iraqi deaths may of course be somewhat different but is almost certainly of the same order of magnitude. It's a horrifying thought that two of the world's most heralded democracies have allowed a catastrophe of these dimensions to occur.

1 For further discussion of the problems in involved in tracking civilian casualties in Iraq and Afghanistan see But who's counting?

Unfortunately, the trend data also shows that casualty rates are steadily rising as the situations deteriorate in both countries.

The latest MOD data on British casualties from Operations Telic and Herrick for the period up to July 15th (not July 30th as stated on the MOD site...) has now been released. The data on fatalities and injuries up to July 15th has been analysed and the results can be seen on the tracking graphs. For information on the Iraq war go here and for the war in Afghanistan see this page. Thanks.